He won several national and international violin competitions (“Luigi Nono” in 2012, “Premio Crescendo – Città di Firenze” in 2010, “Premio Francesco Geminiani” in 2010 among the others), and he also excelled in chamber music winning the First Prize at the “Città di Treviso” International Competition and First Prize Overalla at the “Giulio Rospigliosi” Chamber Music Competition, where he was later invited as a member of the jury.

Stefano Delle Donne performed with orchestras in the most important Italian and European theatres, playing with great orchestras such as the “Solisti del Maggio Musicale Fiorentino”, the “Orchestra da camera” from Imola (as a solo player and concertmaster), the Mozart Orchestra from Bologna, the Petruzzelli Orchestra from Bari, the “Orchestra Filarmonica” from Bologna, the Haydn Orchestra from Bolzano, the “Orchestra del Teatro Comunale” from Florence, and solo performers such as E. Bronzi, E. Dindo, L. Kavakos, O. Semchuk, P. Vernikov, O. Mustonen, A. Lonquich, and famous conductors like Axelrod, Ashkenazy, Abbado, Muti, Rustioni, Matheuz, Tate, Fisch, and Web.

He recorded the world premiere of Niccolò Paganini’s unpublished and unperformed works for Dynamic label in 2013, collected in the album Unpublished, enthusiastically acclaimed by national and international critics (Classic Voice, CIDIMnews, TheStrad, SuonareNews).

He plays with marimbist Claudio Santangelo, with whom he gave birth to Sonus Duo, former “SinfonicaMenteDuo”. With this unique and much-appreciated ensemble, he performed extensively in concerts in Italy and abroad, and he was invited to represent Italy at the “Slavianski Bazaar in Vitebsk 2017” International Festival of Arts.

He presently works as Violin teacher at the Fiesole Music Academy, and he holds Master Classes at the “Incontri col Maestro” International Music Academy in Imola. 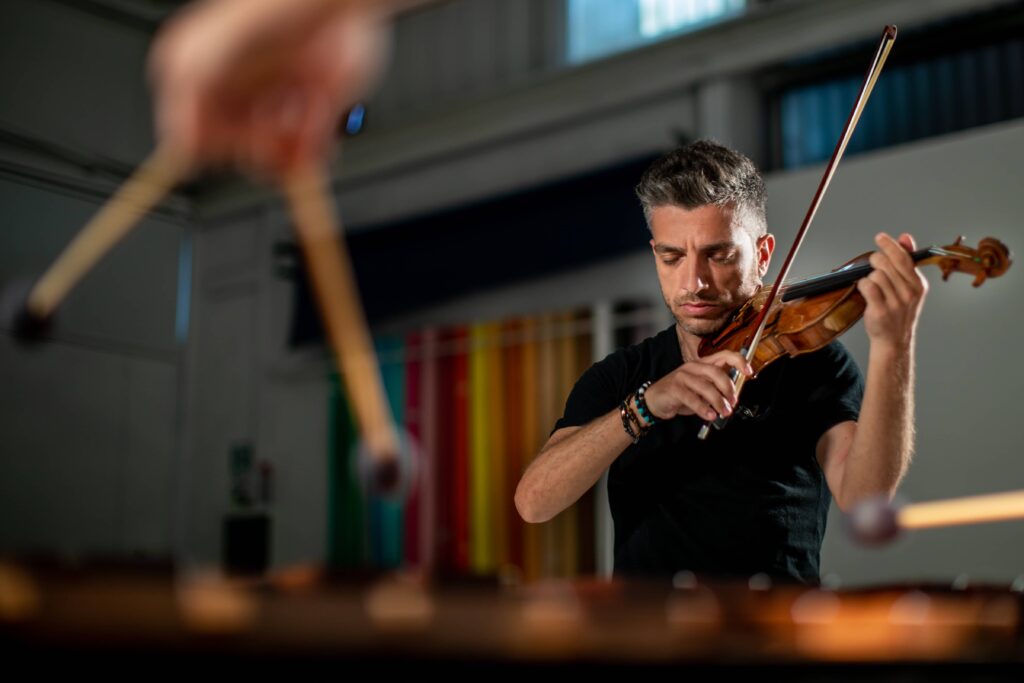