Claudio Santangelo, born in 1987, belongs to a family of fourth-generation percussionists. Infant prodigy, he won several first prizes in national and international competitions, and awards such as the Silver Medal from the President of the Italian Republic in 1995, and the prize as best percussionist student from Yamaha Foundation at 13.

Acclaimed by critics as one of the most brilliant talents in the percussions field, with his musical sensitivity and his composing and interpretative creativity, he’s one of the best marimba virtuosos. At 18, he recorded Procaccini’s “Concerto for Marimba and Orchestra” for EDIPAN with the Ukrainian National Symphonic Orchestra and, in a duet with its composer, works for marimba, vibraphone and piano.
In 2011, he graduated with honours from the “G.B. Pergolesi” Music Academy in Fermo, and he promoted his first CD “Music for You” in Lithuania, gaining appraisal even in the USA. In 2012, he dedicated an original work, “Ensemble for One”, to the 2011 Japanese tragedy, also publishing a live DVD.

Thanks to the liveliness of the repertoire he performs in his concerts and his particular virtuosity highlighted in every performance, he gains wide audience and critical success everywhere. His compositions, even if technically complex and much appreciated by performers, are easily accessible to the audience.

He composed numerous solo pieces for marimba, vibraphone and timpani, and concertos for percussions and orchestra. His latest works, “Fate for 3” and “Vulcano”, were commissioned by Shu-Te Science and the Taiwan Technology University.

His compositions, published by Italy Percussion Edition, are distributed by HoneyRock in America, Percussion Brandt in Europe, and Academia Music in Japan.

He plays with violinist Stefano Delle Donne, with whom he gave birth to Sonus Duo, former “SinfonicaMenteDuo”. With this unique and much-appreciated ensemble, he performed extensively in concerts in Italy and abroad, and he was invited to represent Italy at the “Slavianski Bazaar in Vitebsk 2017” International Festival of Arts.

Claudio Santangelo is a Yamaha and Vic Firth artist. 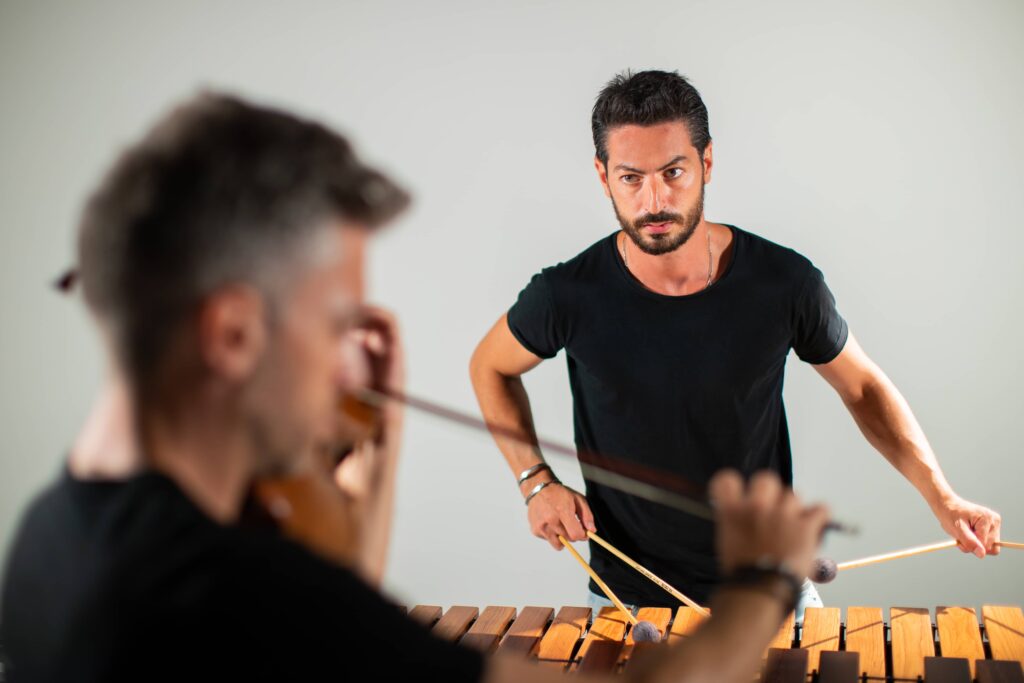